When you look at social media today, you see people looking for validation and even worth. They’re looking for dignity.

People hold their hurt like they’ve got something to bless. They hold it as a whipping rod. “I’m not gonna forgive you because I’m gonna hate you tomorrow.“

The above quote comes from the conversation in this video between minister, activist, author, speaker, Dr. John Perkins and Pastor Rick Warren.

It is one of many quotes that struck a chord with me. Take some time to watch and listen:

What is it about forgiveness? Why is it so hard to walk it out?

People walking in hurt and brokenness because of something(s) done to them. Holding on to it letting it define them. It becomes their dwelling place. Stripped of hope, value, meaning and even dignity. 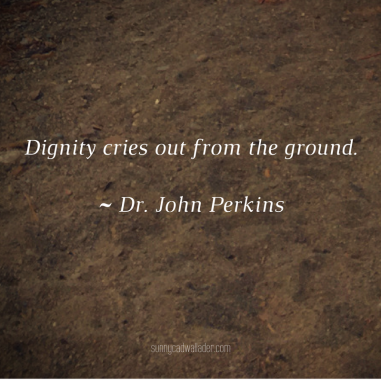 America is a land of opportunity. Not equal or always good opportunity, but opportunity. We are a melting pot of a land with ancestors from many different nations, including those indigenous to this land.

Some came here by choice. Others came here against their will. This nation was and is formed by blood.

What country doesn’t have blood in its history? Turn on the news, read international news-Twitter, countries are still being formed by blood.

Blood can both unite and divide.

There are those who believe that we are as divided as ever in America. Perhaps we are. Or, perhaps, through technology, we are simply more aware of the divide because of the sheer number of voices demanding to be heard.

I once heard a preacher say, “Throw a rock in a pack of wolves and the one who is hit (hurt) howls the loudest”. I’m reminded of that every time I open Twitter.

In the midst of the howling, we’re losing.

Losing respect for each other as human beings. We don’t have to agree with each other on everything, but shouldn’t we have respect for another’s life? If we respect the life, our actions and mindset changes.

Without respect, we can rob others of their dignity by how we treat and communicate with them. We invalidate their existence all because what we believe matters more than their life.

My question is: Is it worth it to be right at the expense of someone’s dignity? We don’t have to compromise our beliefs while extending respect and dignity.

Writer’s Note: As many writers know, you start out writing one way and sometimes it ends up going another way. Such is the case with this post.

I fully intended it to be about forgiveness/unforgiveness. But, there was something about the quote “Dignity cries out from the ground” that I could not ignore.

A good writer would edit. That’s not how I operate when I write. I write what’s in my head. When there’s so much going on in the world around us, so much discord and anger, it all ties together.

Look at America’s battle with racism. It’s always been and is now and, without a fundamental change in teaching the next generation’s understanding of respect and dignity for a human life, racism will always be.

I do not mean for it to sound simplistic. Change is hard. Forgiveness is hard. Valuing people despite differences shouldn’t be.

So maybe this post didn’t quite turn out like I wanted or maybe it did. If it’s got you thinking, then yes, it’s exactly how I wanted it to be.

Knees Down, Prayers Up,