On July 11, 1990, I accepted Jesus Christ as my savior. I am a Christian. In deeper terms, I am a follower of Christ.

Now, before I lose you to anger, frustration or hate because of what someone who called themselves a Christian did to you, let me say this….I know. I understand. I appreciate those feelings you have toward them.

I’ve felt those same feelings since July 11, 1990. I have felt anger, frustration, hate, betrayal, disgust, confusion and unbelief toward Christians. Yes, me…a Christian…has felt the same way as you about other Christians.

I didn’t think that was part of the Christian make-up. It didn’t take me long to realize how wrong that was. Even though that thinking was wrong, it still bothered me. Why couldn’t Christians be perfect?

**quickly looks in the mirror**

I am so completely imperfect. I have been (and occasionally still am) a screw-up. I’m impatient. I’ve lied, failed, yelled, doubted, vented angrily, gossiped, judged unfairly, been hypocritical, cheated, feared, been impatient – unforgiving – arrogant – prideful……feel free to stop me at any time.

I am a sinner. I’ve done so many wrong things in my life both before and after July 11, 1990. I’ve done things contrary to who God is and what He said in the bible.

That I do believe.

Why? Because on July 11, 1990, when I was lost and alone, away from family and friends, raising a child on my own, He sent someone to me to tell me about his son, Jesus Christ. A son who wanted to restore a relationship. The relationship between humans and their creator, God.

Nearly 18 months prior, I moved from Arizona – home to my family and friends and everything I’ve ever known (aside from being born in Oakland) – to Spokane, Washington. My (then) fiancée hated Arizona, the heat, the amount of people in the Valley of the Sun.

Wanting to keep my relationship with him – the man who my daughter called dad (not her bio-dad) – I agreed to a compromise move. He was from a very small town in Washington, but this city girl would have none of that small town life. We compromised on Spokane.

Nice town. Not Arizona – or at least, MY part of Arizona. It was green and mostly white. There was snow – we drove from AZ to WA in the middle of winter! The weather was freezing.

We weren’t in Arizona any longer.

I uprooted myself and my daughter for a man. For a relationship that wouldn’t last through the year.

I found a job quickly. He didn’t.

When he did, he couldn’t keep it. So off to Alaska he went until I got the dreaded Dear Jane letter. He met someone on one of those Alaskan fishing boats, got her pregnant and that was that.

Truth be told, we weren’t right for each other.

I wasn’t the greatest girlfriend in the world. Kind of hard when you’re a mom – the balancing act can be tough when you become a mom and 17 and, in reality, are still growing up too.

But, I remember so clearly, when it was all said and done – he was gone, his stuff was gone, falling to my knees and crying out, “God, HELP ME.”

Growing up, the only God I knew was on a crucifix at the front of the Catholic church with the priest saying the “Hail Mary full of grace” and waving the rosary beads. That “God” was only in my life when I went to what-seemed-like-a-never-ending list of Mexican weddings, rosaries and funerals as a kid.

That’s what I knew about God. What was I thinking calling out to God?

Dear Jesus, I believe you are God. I believe that you died on the cross for my sins. I believe that by the shedding of your blood, I am made right with God the Father. Please come into my heart and make me new. Wash me clean with the blood you shed on the cross. Save me. Heal me. Deliver me from my sin. I love you, Jesus. Thank you.

In what you know is true

You know the Lord will see you through

I was saying God help me again, but in a very different way. Crying and confessing my sins, my imperfection, my failure, my….every negative thing about me….to God.

And God was there.

Up to that point, I felt very alone in a still strange town, raising a child with no family and a few friends around me. Bills were mounting, my heart was aching and God heard my cry.

He heard my cry before and he heard it then.

Let’s be real here. My life changed that day. But, it wasn’t a magical pill or spell to make all of my problems and challenges go away. There was no rubbing the genie lamp to change my life in an instant.

The bills were still mounting, the heart was still aching, but I somehow no longer felt alone.

I would love to say everything became right that day, but they didn’t.  When I look back on it now, I suppose, in a way life turned for the better. I found true love – God’s love that day. And in the now 27 years since that day, I’ve needed every bit of it.

I’m still imperfect. I still fail. I can still be impatient and judgmental and hypocritical and arrogant and prideful and…. 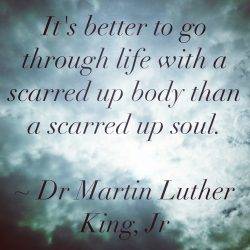 Along the 27 years, I realize that I also have compromised. I’ve compromised my faith to fit in. Fit in at work, fit in online, fit in so people wouldn’t think less of me. Fit in so I wouldn’t be judged.

I put God in a box and said, You’re not a priority. I am my priority.

I compromised my relationship – my eternal relationship – to be accepted by society. When you break it all down, society doesn’t care about me. “Society”, however you define it, cares about itself. Today’s online, social media society says, “We decide who fits in and who doesn’t. If you don’t believe like we do, you are against us.”

Society doesn’t want me to fit in unless I hold the same ideals as society. Anyone who dares to even believe one thing differently or…gasp…be open-minded, society ferociously knocks them down.

The older we get, the more we realize our own mortality. No one knows what will happen tomorrow, but when we’re younger, some of us live with a carefree attitude like we’ll live forever.

No matter our age, we want to matter. We want to be heard. We want to be accepted. In order to do that, we sometimes have to compromise. The longer we compromise, the more it becomes part of who we are.

Intellectually, I’m a high school graduate who has been working since I was 16 (Code for “Experienced”). Racially, I am Hispanic/Latina with three bi-racial children and three bi-racial grandchildren. Politically, I’m as independent as they come – I’ve tried both major political parties…they’re both terrible.

I don’t want to fit in. At least, not at this point in my life.

Fitting in is exhausting. Compromising is exhausting. With people redefining labels of who they are, trying to fit in is impossible. I don’t want a label to define me, especially when I’m still learning and growing…yes, at (almost) 50. Never be afraid to try something new.

I’m not going to push Jesus in your face. I’ll be here if you need prayer, a shoulder to cry on, a word of wisdom spoken, an ear to listen – I’m here.

I’ll stand with you with whatever you’re going through. If we were to sit down together face-to-face, I’d be able to tell you the terrible things I’ve experienced and seen. Maybe that would help gain your trust of me…as a Christian.

I won’t compromise who I am. Drama and betrayal are two things that will limit our interaction for me. I’ve been there, done that too many times. Regardless, I’ll still be there to stand with you.

“But Jesus took him by the hand and lifted him to his feet, and he stood up.”

Knees Down, Prayers Up