In the 80’s, there was a pop band called Depeche Mode with a hit song, “People Are People”. It’s a pretty catchy tune with a memorable chorus.

Whenever I say the word “people”, my brain immediately starts singing…

Some 30 years later and a song like this still resonates with me. People are people. And people come in all different shapes and colors with varying languages, cultures and beliefs.

I’ve been lurking on several social media platforms recently. Most would call it lurking, but I call it observing.

Having been on social media for 10 years and working in it for over 5, I am constantly amazed at the information we humans share on the various platforms.

In the early days, I remember having conversations with people not on social media who couldn’t grasp the concept. They couldn’t see the point of telling people or posting a photo of what they had for lunch.

Now, most of them are on one of the many social platforms.

We’ve moved beyond the “what I just ate” posts. Okay, maybe not completely – yes, I do post food photos on Instagram – but there is now more “diversity” with social posts across platforms.

And then there’s the – and I am putting a lot in this one category – posts of opinions of outrage. 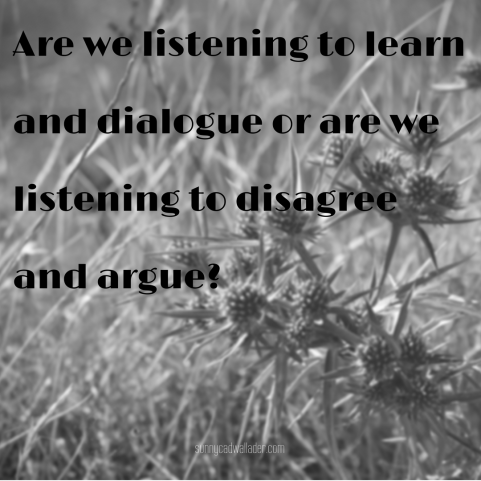 Some would call it justifiable anger due to our current president. However, it isn’t just that. This is anger that has always been there under the surface. With social media, it’s boiling over with a vengeance.

Social media gives everyone a voice, but it doesn’t give them discretion.

“When we listen to disagree, that births hate,” said Dr John Perkins. Perkins, a civil rights/social justice activist said those words at Saddleback Church in January (Dignity Cries Out).

With all the different social channels available, hundreds of thousands of posts in various forms shared every day, that makes for a whole lot of talking going on. If we’re consumed with what we have to say, how discerning can our listening skills be?

One thing I’ve learned is that more often than not, what people are angry about online is just a symptom of a deeper issue. Life has a way of doing that to us. Joblessness, family discord, depression, money woes, company instability – all affect how we relate to others.

We want to matter. We want to be counted. We want to have value. We want to talk about it, but we can’t. We haven’t been able to verbalize our desires and wants to the entire world before social media.

Now, we can do that with a simple tap of a button.

It’s a fine line, balancing the desire to listen and the need to speak. We all want to feel important, worthy and valuable. We seek validation. That our opinion and thoughts – nee our lives – matter.

That’s really the crux of it all.

Deep down, we’re all just people trying to make our way in this world….with meaning. We want to be content. However, when our lives aren’t quite where we want them to be  discontent will take hold.

We get angry and fearful. We go on the attack when someone stirs up that discontent within us. We scream through our typing. We get defensive. We take people to task for not thinking like us because if they thought like us the world would be a better place, right?

If our minds and hearts are filled with discontent, is it any wonder that – to borrow from Depeche Mode – we get along so awfully?

Knees Down, Prayers Up